So, I woke up at 3:30 to see the MV drop and Fake Love was worth it! Also, I’ve listened to Love Yourself: Tear twice and it’s amazing.

Once my album gets here I’ll probably do an unboxing and album review because it’s just that good. But today I’ll be focusing on the symbolic fashion in Fake Love and how it connects to BTS’ other videos fashion-wise. 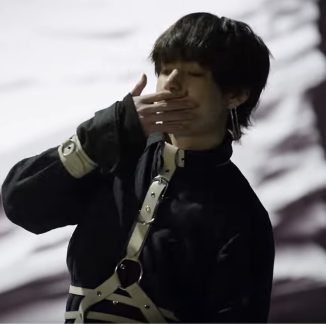 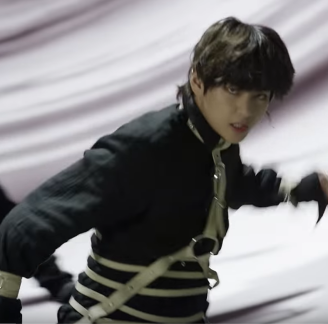 The first outfit we see in the video is V’s harness look. I’m a huge fan of corsets, belts, harnesses, chokers etc, etc, etc so I’m in love with this look. Beyond the aesthetics of it however, this look really fits the message of Fake Love.

This is a translation of the part Tae sings in this outfit. He’s pretending that he’s ok for love and basically enslaving and confining his true self: hence the harness. 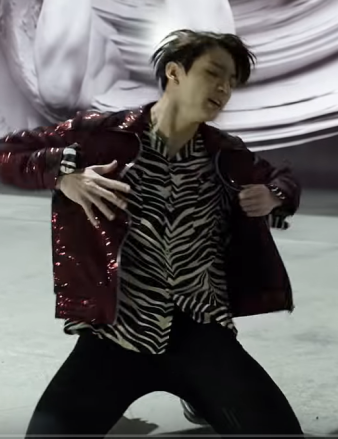 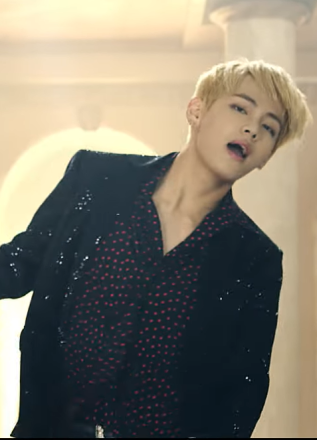 On the left we have JK’s look from Fake Love and on the right V’s look from Blood Sweat & Tears. Out of all the aesthetics in BTS’ MVs I think Fake Love mirrors BS&T the most which makes sense because the songs are similar in their painful desperation.

In these looks we have the same formula: patterned button down shirt with sequined jacket (bomber or blazer) and black pants.

Jungkook says “Wishing all my weakness is hidden” in this part of Fake Love. The wild pattern of the shirt seems to suggest an inner turmoil that’s covered by the sparkly jacket which represents happiness/fun. 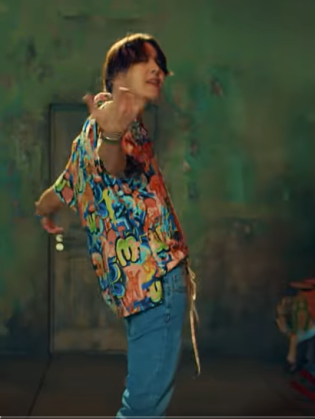 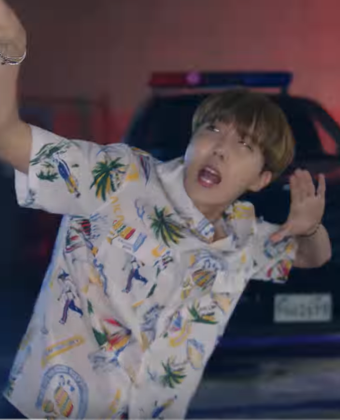 When J-Hope’s part came in I was immediately reminded of his Fire ensemble. Both looks share a “carefree/vaction” vibe that upon first glance seems out-of-place in a track like Fake Love. But the fact that he’s wearing these bright vacation clothes further drives home the point that he’s lying to himself and covering up the inside to the point where he, ” became to not know who I even was” 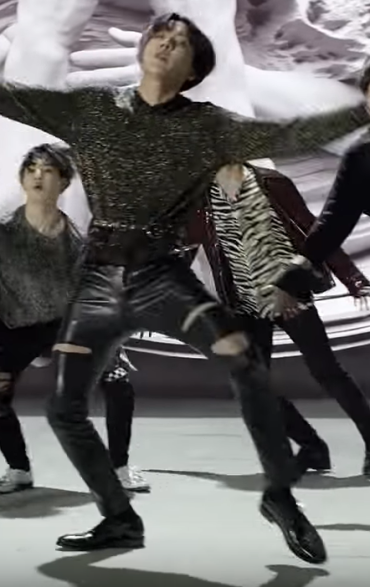 Another similarity I noticed in J-Hope’s looks were the leather pants from Not Today. In Not Today the leather seems to represent strength and edge but in Fake Love leather seems to show confinement and restriction. Especially since the color palette is a lot more muted. Speaking of muted palettes… 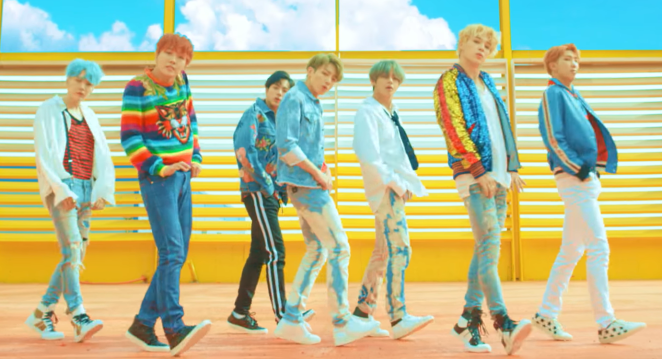 Here we have a group shot from Fake Love and one from DNA. I was struck by how similar the two looks are. We have elements of denim, rainbow, and color however in DNA all of the colors are bright and crisp while in Fake Love they’re toned down and thinned out. As I thought about this further I realized that this continuation of fashion suggests a continuation of storyline between the two songs. DNA is about lovers who’re sure of their happiness and relationship:

“Probably in our past life and in our next lives
We’ll be together forever, DNA

But Fake Love is when one starts to question the sincerity of the other and themselves, when destiny doesn’t seem so sure any longer. So, it’s the same story and same color palette but now it’s sadder, more muted. Also in Fake Love it says

And in the clothes it’s as if the colors were erased. They’re a shadow of what they used to be.

All in all Fake Love was beautiful, a masterpiece of our generation. When the citizens of 3025 want to know what the best thing of the 21st century was, show them Fake Love… ok lemme stop.

Anyway, I hope you liked this post, I do have a couple more screenshots of outfits similar to Fake Love from other BTS MVs, so be sure to like, comment, and follow for a possible part 2.

Go stream Fake Love and watch BTS on the BBMAs!

View all posts by palatespleatsandplots

do y'all also have to point your foot when you extend it or is that just because I took ballet for so long?
perusing my camera roll photo dump:
Valentine's nails 💕
belated birthday brunch with besties